The ‘A.Buzzati-Traverso’ international scientific Campus in Monterotondo Scalo (Rome) has been operative since 1996. It was created thanks to a project of Consiglio Nazionale delle Ricerche (CNR), and it involves the most important international scientific organisations. The CNR established it for the purpose of developing Italian biological and biomedical research for strengthening its international feature.
The Campus was officially inaugurated by the President of the Italian Republic on March 8th, 1999. It is dedicated to Prof. Adriano Buzzati-Traverso, who brought modern molecular biology in Italy.
The Campus is located within the technology park of the town of Monterotondo, in the North-East of Rome.
It hosts the CNR Institute of Biochemistry and Cell Biology, the Core Structure EMMA (European Mouse Mutant Archive), the Mouse Clinic, and the EMBL Rome Epigenetics & Neurobiology of the European Molecular Biology Laboratory (EMBL), one of the world’s top research institutions, dedicated to basic research in the molecular life sciences. 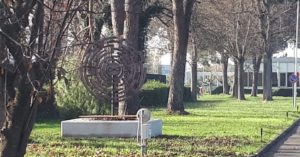 Proximity to other research Institutions

There are four National University Campuses and several private Universities in Rome with strong molecular biology, biochemistry and genetics programmes, and several CNR Research Institutes as well as the Istituto Superiore di Sanita’ (ISS, Italian Higher Institute of Health), the biological laboratories of ENEA (Italian Energy and Environment Agency) in Casaccia (30 km far from Monterotondo), and last but not least the National Institute of Nuclear Physics (INFN) in Frascati. The CNR Rome 1-Montelibretti Research Area can be reached by car from Monterotondo in 7 minutes whereas the CNR Headquarters in Rome can be reached in about 30 minutes.

The International Campus ‘A.Buzzati-Traverso’ is linked to the GARR Italian Research and Academic Network via the main CNR Headquarter node in Rome. The GARR network links most CNR Institutes, Universities and academic-related sites in Italy supporting multiple protocols and standards.

Connections are provided to GÉANT and all other important international research networks.